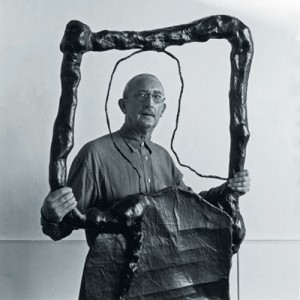 Guido de Waart has worked as a visual artist for over 60 years. During this time he has also lectured at the Rotterdam Academy of Arts (currently known as the Willem de Kooning Academy) and the Academy of Architecture for more than 20 years.

Guido holds a unique position in the development of the visual arts in Rotterdam since the 1950s. As a teacher he was responsible for the education of numerous artists, designers and architects; as an artist he created a unique and multifaceted body of work, characterized by a remarkable continuity.

I was first introduced to Guido’s work in the 1960s at an exhibition in one of the former exhibit halls of the Rotterdam Art Society. He exhibited large graphic sheets, linocuts, placing abstract organic forms in contrast with more geometrical elements. They were beautiful, exciting prints, which impressed not just me, because Guido also won the Print Award by the Salon of Meuse Cities (1967) in those years.

In a way, the theme of his work represented the idea of freedom next to constraint, the emotional next to the rational. This is also the thematic concept that forms the basis for Guido de Waart’s total body of work.

The overview of his work, reveals an artist using a large array of materials and techniques: drawings, prints, paintings, plastic objects and architectural commissions. Remarkably, the experiment, the technical possibilities, craftsmanship and artisanship continuously lead to new visual results and perspectives.